Hia!
We had a four-day-weekend. Thursday was a holiday here, so most kept the friday off too. I've mostly used this time to produce some music and It's been mainly for Lucius. After that I've been struggling with some bugs in the new inventory system, but finally managed to get it fixed. (I think)
So now I've progressed into populating the clean version of the mud city.
I've created a bunch of new NPC characters for the town.

Couple of them look like they are naked in this gif but that's not the case in the game.
They are pretty simple characters like before. I am planning on some puzzles around them. Getting items from some and bringing them to others. Also I think I'm using some of the conversations as helpful clues for the secrets in the town. The player is now stuck here unable to return through the same route he came, so he must find a new way.

The music production for Lucius has taken a considerable chunk now from my evenings and weekends, but I think I'm starting to have what I need. So I can probably continue to focus on Unintended more.

I've been thinking about putting the game to greenlight soon. I wonder if it would go through with it's current state. This would allow me to get a head start on implementing the Steam stuff to the game.

In other news:
They've opened up a movie theater near me, where you can drink alcohol and sit on a sofa with your own table. So we went to see Trainspotting 2 there. It was surprisingly good. We watched the first part just before watching the second one, and I feel like the second one was actually a little bit better. 7/10

Hi.
It's been two weeks since my last post, and they went by fast. Very little progressed in Unintended. I've worked a little with the inventory, but mostly just small adjustments here or there. I've had to do some music for Lucius so that has kept my weekends pretty busy.
I've already managed to rack up quite a lot of stuff for it. This time I'm going for a more simplistic and atmospheric approach on some of the music, to better serve with the gameplay and the structure of the game.


This first one is trying to be one of the more darker tunes of the game. It would be fitting to a situation where the player is getting close to a kill.


This second one is more in the style of a an investigative theme. We will not have much looping environmental music like in Lucius II, but I suspect I have couple of places where to put this specific theme.


I've already done quite a few simple tunes for the game. Here's a screenshot of my working music folder as of now. Few of them are just small singular instruments playing some long notes and creating atmosphere, but also quite a few are full songs. 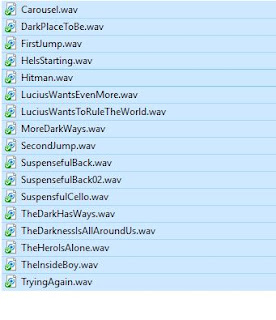 This will also probably give some small hints about the actual game too. :) Not too much though.
We've also bought at least one song from an actual band, that we will use in the game. It's possible that the first trailer will see something like this also, hard to say at this point.

I'm dying to show some gameplay footage and bunch of cool stuff from the new Lucius, but I'll still have to wait a bit for them to be on a reasonable fidelity. Soon the concept images in facebook will end and we will start showing some 3D character art probably next.

I will probably keep doing some music for now, but will also soon return to Unintended updates.

I also went to see the new Alien movie. It was better than I had hoped, but still not certainly the best alien movie. Some good parts and some strange action sequences. They keep trying to make the second movie again, but what they should try to do is the first one again.
I give it 7/10

Hi,
What a week it has been. Shiver is doing it's tax returns and so am I personally. Quite the busy week. I've also put in some time trying out bunch of games. Quake Champions was pretty fun. I also started to replay Grim fandango. Certainly has been very entertaining, but everyone knows that.

As for "Unintended". The mud city has finally been rescued and the summer has returned. Here's some footage of the changed look of the city that I call now Judey.

As you can see the pipes have all been destroyed and the mud has dissipated. Houses are clean and there's bunch of flowers everywhere.

This is Judey. Missing only its occupants. Which I will be adding during the upcoming week. (hopefully) Also we get to try out the dynamites and the new stick item.

So not much, but still something.
I just came from the movie theater, still a bit shaky of all the colors. We were watching Guardians of the Galaxy 2. It was pretty fun. Very crazy but still enjoyable and fun. Tons of action in that one.
7.5/10
Go and see it.

Well that's it for today. See you next time.
Cheers

Unintended shop with diamonds and dynamite.

Hello,
So big changes coming. I've added the first shop and it seems to be working well. I also added diamonds to the game and they equal 10 gold pieces. This seems to work well.
You can check them out here:

So now it's finally due for me to work on a fundamental problem that I've had.

I've known for a while now that I need to redo the inventory to fit better on a local multiplayer game.
So that's what I've done now. Here's the new inventory that should work much better than the old one.

So now for the multiplayer it should work without interrupting the other players too much. I still have some small things I need to work out with it, but mostly it seems fine. Now this change also removed the HUD from the game completely and I kinda like it when It's a bit cleaner, but on the other hand it would be beneficial to see your assigned buttons at all times, so I might be bringing that back. I'll have to give it some thought.