Hello,
It's been a tight week. I've not had much time to work on Unintended. On the beginning of the week I started working on a bug reporter and made it possible for my testers to report some bugs and the rest of the week I kept on polishing some of the already found issues.

Main thing that I've noticed this week is that I need a some sort of system for keeping track all of the spawn points and entrances between areas. 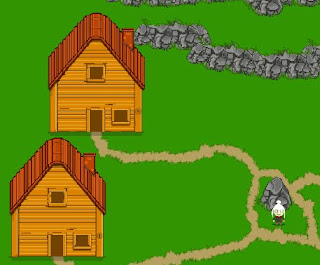 So.. The Unintended graphics. First when I started the project I just created some green land and couple of houses.


The houses are still there, but I noticed that I need a better way to create the area.
I've never really done 2D graphics before so I had to do quite a bit of learning to get this to a reasonable state.

The house I felt pretty comfortable  from a very early stages. My main reference here was a game called Soleil for Sega Mega drive.
After just creating the furniture for this I was able to create pretty different types of houses with ease. I still need to figure out a better way to create the base for the houses. It's currently not very consistent.

As for the environment I ended up doing a basic tile-mapping and finding a tool for painting it easily to the actual game. After several variations and different attempts, this is what is in the game now. We will have to see if it survives to the very end of the production.

Mostly I struggled with the cliffs and how to get them all to work together seamlessly. After this first one, creating the other areas has been much easier. I mostly just copy this base and start working from there. I also brought my ancient "Wacom" from the office to help me out a bit. After doing the houses with mouse only, it's been a welcome help.

I still haven't really figured out a way here to automatically add animated tiles to the map, but I think I'll just add them separately all together.

That's what I have for you about the environment-art at the moment. I guess next I should talk about the characters and how they're made.

Until then..
Cheers!
-Johannes

So. It's that time again. I need some new music.
I've just started a new desert themed area and I'm also planning on a castle type of area.
Maybe first some caves and then some mid boss castle.

On the desert theme, I felt like it had to have this feeling of moving slowly and getting stuck, but I also wanted to keep the original theme there in the background.

So I'll let you compare the two:

This is the Over-world music. It's your basic cheery and happy music that tries to stay on the background and hopefully does not get too annoying. No complaints so far.

And here is the desert theme. It kinda sort of has some of the same elements there.


I also did not shy away some of the eighties synth sounds this time. I guess watching "Stranger Things" might have influenced a bit there.

So then there was the castle theme.
My all time favorite song for games has always been the Super Mario world castle theme. So I immediately started to look for something similar. Being that the whole game is very much influenced by the games of that era, I saw it only fitting to do that with the music also.

Now getting it actually done was a whole another thing . There's been several iterations of this "churchy" castle music and I'm still not really 100% happy with it. It's very likely that I will be changing these to a more fitting style, once I actually have the castle area ready, but I though some of you might want to hear it as it is.

Let me know what you think.

ps.
Here's a link to some of my earlier music from Lucius II.

This is the first iteration of pushing some movable rocks.  The darker rocks are immovable and the lighter ones can be pushed around. I think in Zelda and other games of the genre, they tend to only allow pushing one rock at a time. Here you can push several at the same time without any restriction. I'm not sure if its a good idea but at least it's slightly different. I will probably end up also adding different types of these since I myself find it very satisfying to solve these.

It's interesting that the route has to be different when coming back. I guess these are pretty common puzzles to have but I still like them.

I guess I could combine some of the usable items here like freezing objects and rock breaking.

I'm sure there's plenty of options.


I like the idea of the game being more puzzle based, slow and relaxed, rather than quick action.
So far every monster is able to kill the player in one hit. Not sure if that's the way to go, but I'm trying it out for now.

This is the project that I've been working on this summer.
It's a 2D adventure game where you play a little boy that accidentally breaks a magical item that freezes his home and family. He must adventure in a far away land to find an antidote for this spell.

It's still in very early stages and subject to a lot of changes but the main idea should come across.

I'm actually hoping to make this into a local multiplayer game. I noticed that Steam was lacking on adventure games that I could play together with my girlfriend so I decided to make it myself.

I'm not really very familiar with 2D graphics and I haven't done something like this before.
It's an interesting learning experiment. I think these graphics you are seeing are already the fourth iteration of the games overall look.

It's gonna still take a good while until this is done, but I'll try to keep posting about it while it progresses.