The Arrival and Hacksaw Ridge.

Hi,
So this is a bit of a bonus post. I've been going to a lot of movies lately (not developing games, I know.) and decided that couple of these would deserve a special mention. Who knows, maybe someone will get some more business.

Last sunday we went and saw Hacksaw Ridge. I was already very much aware of this movie and I had quite the high expectations going in. It certainly lived to the hype. It was a very moving film with lots of majestic moments and an underlying story that still even now after reading about it extensively online, is hard to believe.

Many times the lady next to me was in tears during the movie, and I have to say so was I. I tend to get emotional easily but still I think it's a good indicator that the movie has something.  I'm very glad Mel Gibson is directing movies again. He certainly has a talent for it.
I would not be surprised if this movie would go and win one the big oscars this year. It's all about the politics I guess. It's possible that few of the scenes in the movie might of been slightly overly majestical, but I was able to get over it quickly after learning about the true story behind the movie. It certainly should be majestic. I would say it was not majestic enough!
I give it 9/10.

So a couple of days after this, we went to a mystery screening. It's this thing where you go into a movie theater without knowing what they are going to play for you. You only know that the movie has not been released yet. The movie was called The Arrival. This was also a very good movie. I have to say that this movie benefited a lot from the whole mystery thing. I was very focused on the movie and eager to learn what it was. I only found out the name of the movie from the end credits. During the opening act, I noticed that the soundtrack was from the great Jóhann Jóhannsson. It was very easy to recognize from the simplistic and still epic sound of it. After watching Sicario I became a big fan of him. The plot of the movie was very familiar from a couple of 90's movies, but the execution I would say was exceptional. Very well done and worked very well as a mystery movie. I would definitely recommend it.
8/10

Email ThisBlogThis!Share to TwitterShare to FacebookShare to Pinterest
Labels: movies 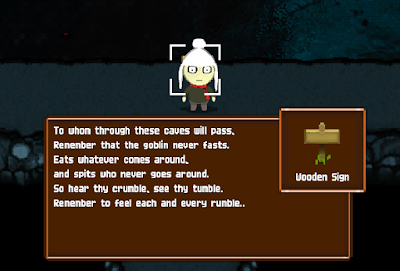 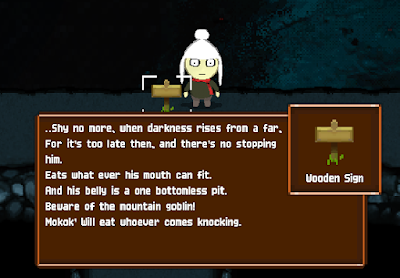 Sign to warn you is always good :)
I'm still contemplating on how to kill this Monster. I've tried  a few different ways already, but I'm not really sure yet.  Maybe someone out here in the "internets" has ideas?

How should Mokok' be killed?
If you have any ideas, let me know!

Ufc 205, Us Elections and Multiplayer.

Well now..
Quite the week we've had. Trump was voted the president of the United States, and there was a historic first ever UFC event in New York. I just finished watching the fights and I have to say it was pretty incredible night of fighting in Madison Square Garden.

The US election is kinda weird. You can win the popular vote, but still lose the election makes no sense to me.

I haven't had much time during the week, but I did manage to squeeze my few hours in anyway.
Mainly I've been still working more on some the issues that came up when I added the multiplayer feature. Anyway it seems to be finally working now around 90% certainty.

There were still quite a few bugs looming here or there, but I did manage to finalize the camera movement, added support for multiple inventories and things like that. I think this still warrants quite a few changes on some of the basic systems, like conversations with npc's and player item slots.

I also started working on a first boss encounter which I found quite interesting. Hopefully I'll be able to show you that during the next couple of weeks.

Maybe that's enough nonsense for today.
I'll try to keep these more detailed when I have actually something interesting to show.
Until next week.

Phew. This week has been quite the pain in the ass. Adding the co-op feature has given me some headache. Mainly I've been struggling a bit on assigning all the controllers to appropriate players.
I did finally get it to work correctly. My issue was differentiating all the controllers to each player. I was using Rewired for the input and in the past we've noticed that this works great with Unity. With Rewired  we've been able to fix issues where virtual joysticks were bugging the controllers, or few issues that Windows 10 had when using Xbox one controller. Rewired on the other hand has keyboard assigned to each player by default and it took me a while to figure out how to bypass this.
Eventually I got it to work and I created this character selection screen. It also took me a while to figure out how to make this work with loading and all the other possible issues that may arise.

At this point it seems to be working well. I still have many issues that I need to tackle on the whole multiplayer. For instance the level changes are still an issue and also I need to write some system for audio and the camera placement. I'm thinking of placing the camera in between the players and place the audio listener there too.

So not so much visual progress there, but a lot of headache. I've been also thinking quite a bit about these characters what this world IS exactly. I'm still looking into it deeper, but at the moment I think I'm starting to have a clear picture of whole.

Last week I told about this mud thing I'm playing with and I thought I might show it now. It sticks to anything that goes past and takes it to the flows direction. There's some puzzles around how to handle these and how to use them to your advantage.

Lucius is also coming along well. The Halloween sales have been dominant everywhere and the bundle is still very cheap.  Here's a concept of the area I'm currently working on. I really like the atmosphere that we are able to get done this time, but a concept is unfortunately all I'm able to show you guys at this point.

Hopefully I will be able to get some more stuff done during the upcoming week.
Until then, cheers!
-Johannes